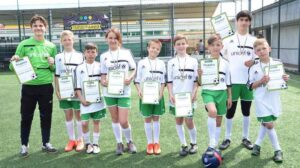 In October 2008, the football project “Red Card to Child Neglect” in “The Way Home” Odessa Charity Fund was started. The children’s street football team – FC “Domovenok” was formed of the inmates of the Fund.
As practice shows, teens are willing to change a way of life, if they are offered a really good alternative. One of these alternatives is football. The social adaptation through sports has become a successful strategy in many countries because the passion for football has the unique ability to erase borders in communication between people. With the support of the integration programs, sport becomes a means for creating new opportunities for children and young people who passed through severe trials of life.

The objective of the project is social rehabilitation of children and adolescents by involving them in playing football.

Girls and boys play in the team “Domovenok”. Street football is a sport with no discrimination based on sex. Football develops trust and respect, team spirit and will, self-confidence and desire to win. Playing football really helped them to adapt to society, improve their health, and most importantly, gave the incomparable pleasure of own real victory. This is what imprinted in the memory forever, something that will keep them for life when it is difficult or even scary. After all, the memories remain of how by stepping over themselves, they were heading to victory.

“From now on everything will be different …” 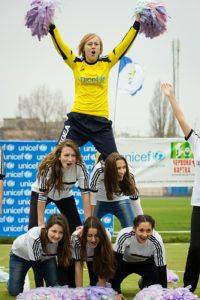 In March 2009, “Domovenok” had a friendly match with FC “Maestro” consisting of the stars of Ukrainian show business and pop. The game ended in a draw 5:5, and after the match, distinguished guests visited the Children’s Rehabilitation Center of “The Way Home” Fund, met and talked with the guys. At the request of children, the musicians wrote and performed a song about “The Way Home”, which became the unofficial anthem of the Fund:

There was a moment, there was the glue “Moment”.
Every Kent took it with him.
But “The Way Home” we found
And now all troubles are behind

From now on, all will be different
After all, we have “The Way Home”.
Know yourself, and tell everyone you know
We have “The Way Home”!
***
Anything is possible if you have a dream.
Hold on, please, just a little.
If you know, why should I and where
There is a hope if the way is visible.

In October 2009, “Domovenok” went to the city of Ternopol to take part in the first football tournament in the history. As the result – the last place in the overall rating and only 1 goal scored. But the important thing is that the guys gained valuable experience in football at the event, they saw the other teams playing and plunged into the atmosphere of the tournament. And this, of course, is a great boost for the children, the motivation to strive for excellence. 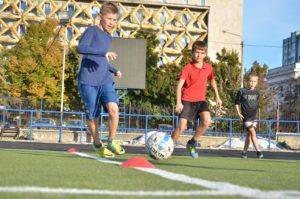 “Green football for children’s health”
In 2010, “The Way Home” Odessa Charity Fund was the organizer of the First Regional Championship of Ukraine on street football among teenagers who are in crisis situations. The tournament was held under the motto “Green football to children’s health”. In addition to sporting events, the participants carried out “green action” on waste collecting and beautification of the area. The competition was attended by teams from Kiev, Donetsk and Odessa, and the championship was held in three stages: spring tournament was held in Donetsk, summer – in Odessa, and autumn – in Kiev. In March 2010, “Domovenok” took part in the presentation of FIFA World Cup on “Donbass-Arena” stadium. The young players had a unique opportunity to see the World Cup, the trophy that once every four years is awarded to the strongest football team of the planet. Such moments in life give happiness and faith in their mission to children! In November, in Kiev, players of “Domovenok” won silver medals on the interregional championship of Ukraine on street football. In addition, the children visited the Hall of Fame Museum of “Dynamo Kiev” and the football match “Dinamo” – “Metalist” of the Ukrainian Premier League. 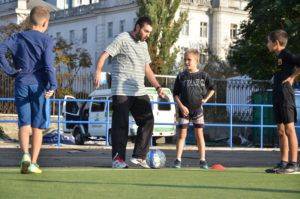 Forward to new achievements!
The football year 2012 for players of “Domovenok” began with social and sporting event “Football Star of the Future” which was held in the city of Ternopol in May. In addition to football, the young people from Odessa took part in the “Olympic day” – together with the President of the National Olympic Committee of Ukraine Serhey Bubka, the guys ran a symbolic race. June for players of “Domovenok” turned out to be truly hot month both as to the weather, and by football standards. The team from Odessa participated in 3 competitions: UNICEF Cup and «Street Stars», held in Kiev, and the tournament devoted to the International Day against Drug Abuse.

We support Ukraine at Euro 2012!
Here is happiness – the trip of “Domovenok” to visit the match of the European Football Championship Euro 2012 between Ukraine and Sweden! It was made possible thanks to the help and care of the Childhood Foundation of Queen of Sweden, which provided young football players with tickets for the match. 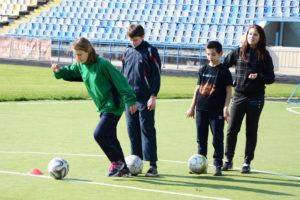 The new horizons.
During 2012-2014 our team’s line-up composition of football team “Brownie” has changed significantly. It was organized a really remarkable “renovation” of the team – if before most of the team were boys of ages 15-17 years old, but now the focus is on boys and girls ages of 10-14 years old. In the same time, it is continued the work with “graduates” – guys of 15-17 years old.
In November 2013 the dream of the team “Brownie” came true – it was officially opened a special mini football ground, on which the team trains. The team «Brownie» regularly participates at the annual national tournament “Cup of UNICEF”, the event takes place in Odessa. Currently OCF “Way Home” is directly involved in assisting internally displaced persons from the area of ATO. Getting into another social environment, children and teenagers, internally displaced persons, have a possibility to adapt easily and to find their own place in new surrender. One of the major points of social rehabilitation was the involvement of displaced children into football training process. During joint exercises, the kids of the Foundation take a direct part in the process of the returning into civilian life the children that arrived from the zone of ATO. “The main thing is not the victory but the participation” – this forgotten slogan of the Olympic Games, characterizes the strategy of the football team of OCF “Way Home”. In this case, the game of football, firstly – is a communication, a friendship, a support and an understanding. It is the main thing that teaches us to be real, sincere and honest human.

The work of the “Red Card to Child Neglect” continues. In the training, there are attracted guys who want to be engaged in street football. All of them are from low-income families or crisis, from an orphanage or rehabilitation center. All of them want to improve their lives. Possibly, not all of them will become famous footballers, but we believe that through football, they can change themselves and change their lives! 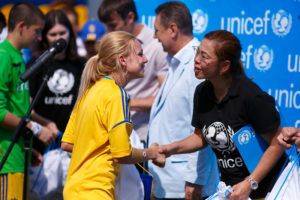 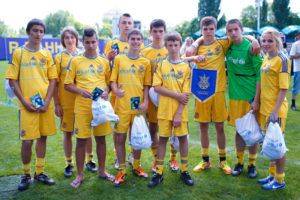 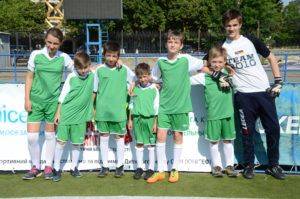 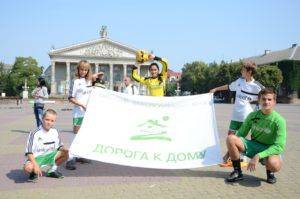