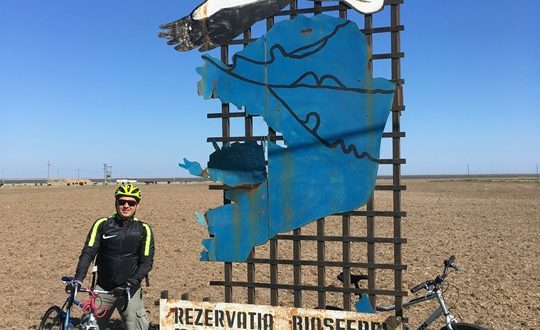 The London teacher Nick Messie will take a cycling marathon of the 600 km in order to put attention of the world society to the IDP in Ukraine.

The single marathon will take place on April 10-18, 2017, during which Nick Messie and the Georgian activist Sergo Halatyan will drive the bicycles from Romanian town of Constanca to Odessa. The rout will follow the Romanian cities then will pass Ismail, Sarata and Belgorod-Dnestrovski – to finally come to the destined Odessa. The final point of the marathon will be Odessa Charity Foundation “Way Home”, that is realizing the programs of social services of the IDP children and families.

In order to support the marathon, Nick Messie launched the croudfinding on the  justgiving platform – the collected money are planned to be given to the Foundation.

«For the first time I wisited Ukraine in 2012 – that time I went to Crimea. I wanted to come back and bring my students there so that they can teach Ukrainian children English. But since the stuation changing, we have to pospond the idea. I kept an eye on the situation in Ukraine and one day just decided to make a marathon in order to earn money for the “Way Home” Foundation, as well as to point the attention of proplr to the crisis of the IDPs, that lost their houses. I fund the information about the “Way Home” in the internet, read about all the projects they are doing for the IDPs and I wanted to take part in this activity of the Fund».

On April 18 Nick Masie and Sergo Khalatyan will complete the marathon and will arrive to the “Way Home” office in Odessa. They are also hoping to come back to Ukraine in the summer to keep  their kind actions.