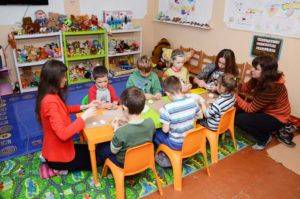 Since the beginning of military actions in Ukraine, Odessa has become one of those cities that have taken upon itself a large part of IDPs from Crimea and area of ATO. Odessa Charity Foundation “Way Home” is directly involved in assistance of IDPs from the Donetsk and Lugansk regions and Crimea. Beginning from June 2014 Foundation gives accommodation for specified organized groups of children and families with children, providing them with food and other necessities. On basis of social hostel for displaced families with children, “Way Home” Foundation opened “Sprout” center for daily sojourn.

Target Group of “Sprout” center for daily sojourn is aimed on: children and teenagers from internally displaced families aged from 3 to 14 years old and their parents.

“Sprout” central main objective – is psychological and social rehabilitation and adaptation of children from families of internally displaced persons from war zone. Two age groups are included in work center: pre-school (3-7 years old) and pupils (7-14 years old). Mentors and psychologist work with children through conducting of psychological diagnosis and training sessions as well as lessons for children and parents, aimed at mutual support and understanding in family. In addition to it, families with children are also provided with personal hygiene kites, seasonal clothes, stationery and other necessities, based on individual needs. Adaptation to new living conditions is organized during work with parents.