Sports became a successful strategy within the integrating work with the people in crisis situations all over the world. The passion to football has the unique quality to erase the borders between people and obstacles in interaction. With the help of the integral programs for the people who went through the difficult life situations sports became the mean of social work. Starting from 2004 Odessa Charity Foundation “Way Home” is implementing the program of social adaptation for the people in crises. One of the ways of work is expressed in welcoming people to the most tolerant sport – street soccer. 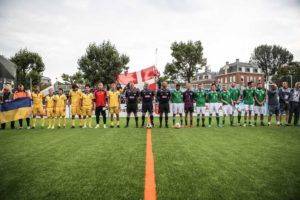 Annually, the Ukrainian national street soccer team, that was formed by the “Way Home” from the people in difficult life situations, takes part in the World Championship of the street soccer among the people in crisis situations (Homeless World Cup) and in the European Championship for the street soccer (Homeless Euro Cup). In order to form the national team, the OCF “Way Home” was organizing the series of internal tournaments within the country. The winners were chosen to be a part of the Ukrainian national team.

The participation of the national team in the World Cup became possible due to the membership of the “Way Home” in the International Network of Street Papers. Mel Young was the one who initiated and founded the Network of Street Papers and Homeless World Cup. Also, starting from 1993 Mel is issuing the weekly street newspaper The Big Issue. The paper is being sold on the streets by the homeless people. This activity allowed the homeless people to have legal earnings, which became for many of them the only survival kit.

After the appearance of the Network of Street Papers, many other street papers from all over the world have joined the network. In 2003, INSP in collaboration with the UEFA organized the first Homeless World Cup for the people in crisis situations. All members of the INSP – the NGOs, publishing the street press, could participate in the tournament. Ukraine is presented in the network of INSP by the Charity Foundation “Way Home”, that is publishing the street edition with the same name (it is being distributed on the streets of Odessa).  That’s how the Odessa NGO could form its national street soccer team and take part in the Homeless World Cup.

The achievements of the Ukrainian street soccer team on the Homeless World Cup:
World Champions of 2009 Cup.
Second Place of  2015 Cup.
Third place of 2005 Cup.

There are usually 48-54 participants from all over the world that take part at the tournament. The program of the Cup is build by the unusual scheme: each of the teams should play as many games as possible. The Cup is taken place at the special field 20X10 meters, with the 4-meters gate and 4 players in the field. This is made in order to fit the possibilities of the players with special needs. The mixed (male-female) teams are also allowed. There is also a separate set of games for the female teams, which are usually 16.

Last years the Ukrainian team was mixed. In the 2015, the team took 2nd place and the team consisted of six men and two women.  But the main achievement of the team of the “Way Home” was  becoming a World Champion in 2009 in Milan, taking the second place in 2015 in Amsterdam and the third place in 2005 in Edinburgh. The team has also been granted with the secondary prizes for the teams in the first 8: in 2010, it has become the owner of the Prize of Honor and Dignity (Rio de Janeiro), and in 2007 год – the Prize of the City (Copenhagen).

What is a Homeless Euro Cup?

European Championship for the people in crisis situations has the similar aim as a World Cup. The main difference is that the Cup is for European teams only and has the only venue – Gdansk, later – Vrozlav, Poland. Just before Euro 2012, the organizers of the Cup, St. Albert Brotherhood, invited many teams from Poland and the European countries to take part of the Cup. Several teams from Ukraine were also invited, but for some reasons only the team of the “Way Home” Foundation could attend the championship.

The criteria of the choosing the participants of the Ukrainian street soccer team.
The team is being formed from the people in difficult life situations. Annually the Homeless World Cup is sending the list of criteria to fit the Cup. The obligatories are:
— older then 16;
— never taking place at the World Championships before (the participant can only take part in the Cup once in a lifetime);
— the absence of the accommodation and registration;
— to take part in distributing the street press in one’s area;
— have the status of IDP;
— to be or to pass the addiction prevention program
The full list of criteria you can find here.

For the people in difficult life situations taking part in such an honored Cup as the Homeless World Cup is a big step towards changing one’s life for good. There many additional events taking place during the Cup, so that the participants can communicate with each other, get to know each other’s problems and speak about their own. It is important to have this kind of sharing experience for them to know that they are not alone in their situation and that there are people who care and are able to help them.

After a certain period of time, the Cup Committee is making a research on the life situation of the participants, watching, how many of them have radically changed their lives after the Championship. The statistics of the research shows that most of the participants of the Homeless World Cup could tremendously change their lives, their daily routine,  relations with the other people, tec. It means that the World Cup has become a real step into the new life for these people.

We can say the same about the Ukrainian street soccer team: most of the participants of the championships have good jobs and families, and do not experience any problems with the law – this altogether shows the great influence of the sports towards the quality of life of the people living in difficult life situations.

And for now, we are looking for the new championships to come. With new hopes, both sportive and social, we go on.